Here's a list of my published books with a brief description of each. Several have their own pages or associated pages else where on this site. 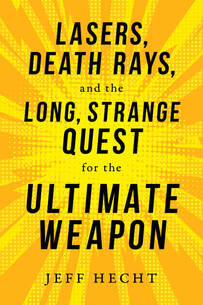 Lasers, Death Rays, and the Long, Strange Quest for the Ultimate Weapon.  Available from https://rowman.com/ISBN/9781633884601 2019 (ISBN 9781633884601) or from bookshop.org.
The story of the quest for energy weapons, from the ancients who armed their gods with lightning bolts to modern military forces building high-energy lasers to zap rockets and other weapons fired by insurgents. That quest has been a long, strange trip. In the early 20th century, inventors from Harry Grindell "Death Ray" Matthews to Nikola Tesla tried to build wireless radio or electrical weapons to protect cities from aerial bombing. In the last half of the 20th century, armies sought high-energy lasers to defend against nuclear missile attacks. Both brought misadventures, and neither made the grade. Now armies are scaling up a new type lasers used for industrial cutting and welding to shoot down drones, rockets, small boats and other insurgent weapons. So far, their results are looking good.
More details on my Lasers, Death Rays page. 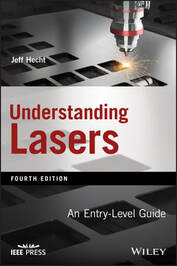 Understanding Lasers: An Entry-Level Guide 4th ed. Available from  IEEE Press/John Wiley & Sons 2019 (ISBN 978-1-119-31064-8) and bookshop.org.  The updated and expanded fourth edition of my tutorial introduction to lasers and related technology. It begins with an introduction of the laser concept, describes the physics behind lasers, and covers basic optical concepts. Several chapters describes the major types of lasers, including semiconductor diode lasers, gas lasers, fiber laser and solid-state lasers, plus laser-like sources. Three final chapters cover applications of low-power and high-power lasers, and the broad range of research with and about lasers. Weighing in at over 580 chapters, it includes a laser glossary and a detailed index. Published in paperback by IEEE Press and Wiley. You can find more details on a separate page devoted to Understanding Lasers. 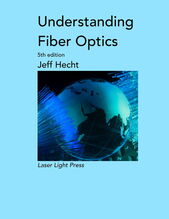 Understanding Fiber Optics, is a tutorial on fiber optic communications that has sold over 100,000 copies in five editions. The current edition includes 30 chapters, a glossary, and a detailed index in 790 pages. The book has been widely used in technician training, and is filled with diagrams and illustrations explaining the operation of optical fibers, lasers, transmitters, cables, receivers, splices, connectors and other components. The current fifth edition was originally published in 2006, Laser Light Press has made a PDF electronic version available from PAYHIP.com for $9.95. A print-on-demand paperback edition is available for $39.00 from bookshop.org. More information is available on my Understanding Fiber Optics page. 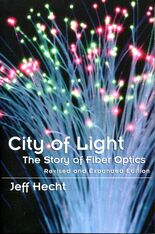 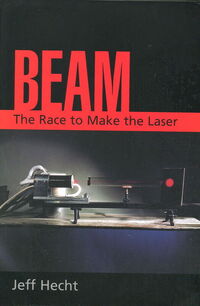 Beam: The Race to Make the Laser
Oxford University Press, New York, 2005. The fascinating story of one of the 20th century's most celebrated and surprising inventions. It began with an idea of Albert Einstein's taken in a new direction by Charles Townes on a Washington park bench one morning in 1951. It continues through the demonstration of the first laser in Malibu, California, and a surprisingly difficult aftermath.  Available in Paperback $37.95 ISBN 9780199738717, or Hardcover $73.00 ISBN: 9780195142105 from Oxford University Press. Both formats also available from bookshop.org. An ebook edition is also available. I have signed copies available for $24 in the US. You can read more about the book on my Beam page.

Introduction to Laser Technology 4th ed
Breck Hitz, J. J. Ewing and Jeff Hecht Wiley/IEEE Press 2012 (ISBN 978-0-470-91620-9). A textbook on laser technology for technicians and engineers which I collaborated in writing with Breck Hitz and J. J. Ewing. This is based on a short course that Breck Hitz has presented widely.  Both ebook and hardcover editions are available. 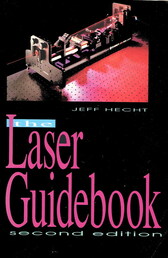 The Laser Guidebook 2nd ed. McGraw-Hill, New York, 1992 (ISBN 0-8306-4274-9) is a  practical guide to commercial laser technology, written for engineers who need to work with lasers. It reviews all major types of commercial lasers that were available at the time of publication in 1992, with details on their typical performance. It's now three decades old, so it doesn't cover the latest and greatest lasers, but is is a great source on vintage lasers.  You can order new copies of The Laser Guidebook from McGrawHill Education for $58.00, bookshop.org, or look for used copies on eBay or Alibris. 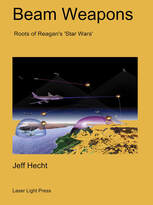 Beam Weapons: Roots of Reagan's 'Star Wars
Back in 1984, I wrote the first book detailing development of high-energy lasers and other directed-energy weapons. Originally titled Beam Weapons: The Next Arms Race, it focused on Ronald Reagan's plans to build a massive high-tech system for defense against nuclear missiles, but also covered other attempts to develop beam weapons for use on the ground, in the air, at sea, or in space, including against satellites. This new edition from Laser Light Press includes a brief epilogue on developments in directed-energy weapons to 2015. Bookshop.com offers Beam Weapons: Roots of Reagan's 'Star Wars' for $15.99 in a print-on-demand edition.  A PDF edition is available from Payhip for $3.99. A $3.99 ePub edition is available from Smashwords, Apple iTunes, and other digital stores. A PDF version of the original Beam Weapons:The Next Arms Race is available from Google Books. 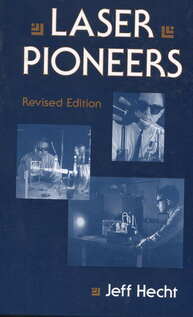 Laser Pioneers: Revised Edition: Academic Press , 1991 (ISBN 0-12-336030-7) is available from bookshop.com and other booksellers in hardcover.
A history of the early development of lasers, including a 60-page overview of laser history with extensive references, and interviews with the laser pioneers who developed major types of lasers in wide use. Interviews include Nobel Laureates Charles Townes, Arthur Schawlow, and Nicolaas Bloembergen. Also interviewed was Gordon Gould, whose laser patents earned him millions of dollars and election to the National Inventors Hall of Fame.  I have a limited number of copies of both the revised edition and of the first edition published by High Tech Publications (which includes an interview with Theodore Maiman); please contact me for further information. 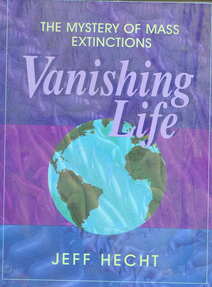 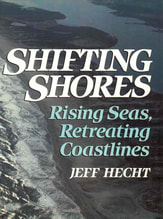 Shifting Shores: Rising Seas, Retreating Coastlines Charles Scribner's Sons, 1990
This young adult book warned about the problems posed by rising seas, coastal erosion and the loss of wetlands 15 years before Hurricane Katrina devastated New Orleans. This book is old, but coastal erosion remains a major environmental problem that will get much worse as rising temperatures continue to melt glaciers and warm the seas so they expand. To help increase awareness of this important issue I am offering PDF copies free from Payhip. Alternatively, you can buy an electronic copy from Google Play for $2.99. The book is out of print, but I have some copies available for $4.50 to cover postage and handling. Please contact me for further information. 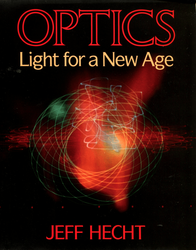 Optics: Light for a New Age
Originally published by Scribners in 1988  (Young Adult). An introduction to optics, light, and lasers for middle school and high school age students. This was given an honorable mention from the New York Academy of Sciences for best science book for readers in its ago group when it was published. Much of it is still a good introduction to basic optics, but technology details are dated. To make it accessible to schools, libraries and young readers, I have made a PDF version available for free from Payhip.com.  Paper copies are available for $12.99 from Amazon.com, along with a $2.99 print-replica edition for Kindle. A PDF version also is available through Google Books for $2.99. 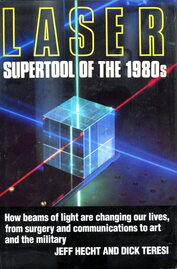 Laser: Supertool of the 1980s, by Jeff Hecht and Dick Teresi, originally published by Ticknor & Fields 1982, paper 1984. Later republished by Dover in 1998 as Laser: Light of a Million Uses.
This is a vintage laser book -- a pop-science account of what laser technology was neat and new as of 1981 when it was written. At this point, it's mostly of interest as a time capsule showing the state of the art in 1981 and how we expected the future to be. Needless to say, there have been plenty of surprises. If you want a copy, please contact me and I will send you a signed copy of the trade paperback if you are in the USA. Please include your address and specify inscription to help me clean out my attic storeroom.