City of Light: The Story of Fiber Optics 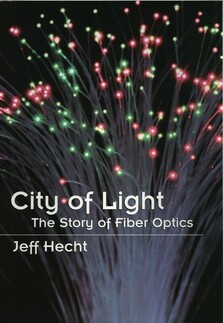 I have covered the development of fiber-optic communications for over 40 years, and it's given me the rare thrill of watching a technology on a roll. I feel like a sports writer with the good luck to cover a truly great team on its way to a championship. The people have been nice, the technology is fascinating, and its impact is all about us. I was trained as an engineer, and one of the joys of engineering is to see something being used that you have built.

I also was fortunate that the Sloan Foundation chose to make City of Light part of its Sloan Foundation Technology Series. A generous grant gave me the time to dig deeply into the past, talk to the people who made history, and do my best to get the details right. As I delved into the past, I grew more fascinated by the story. I learned how fiber optics evolved, shaped by new ideas and opportunities. It took a whole city of people to build the new technology, so I chose the title City of Light. I enjoyed writing it; I hope you enjoy reading it.

I have posted a brief history of fiber optics and a fiber-optic chronology elsewhere on this web site.

Expanded Table of Contents
1.    Introduction: Building a city of light (Overview)
2.    Guiding light and luminous fountains: The origins of light guiding as a lecture-hall demonstration, light guiding demonstrations at the great Victorian exhibitions, and early applications of the idea.
3.    Fibers of glass: Making the first glass fibers, not for light transmission.
4.    The quest for remote viewing: Television and the legacy of sword swallowers: The origins of imaging through bundles of fiber, starting with the quest for remote viewing (what we now call television), and medical imaging (the gastroscope). Covers the first two "inventions" of fiber-optic imaging around 1930.
5.    A critical insight: the birth of the clad optical fiber: The first widely recognized demonstrations of image transmission through bundles of flexible optical fibers, with three more independent inventions of the concept. The crucial enabling invention was cladding bare glass fibers with a layer of material having a lower refractive index, a patent that was lost on technical grounds.
6.    99 Percent perspiration: the birth of an industry: The race to build the first practical imaging bundles, won by a physics undergraduate at the University of Michigan, despite competition from the then-giant American Optical Corporation.
7.    A vision of the future: communicating with light: The growth in interest in communicating at higher and higher frequencies, ultimately moving to light.
8.    The laser stimulates the emission of new ideas: The invention of the laser stimulates serious efforts to build optical communication systems. However, most involve transmission through the air or through hollow light pipes.
9.    "The only thing left is optical fibers": Standard Telecommunications Laboratories in England shifts its optical communications research to optical fibers, as analogs of plastic microwave waveguides. Charles Kao elucidates his prophetic vision of practical fiber-optic communications.
10.    Trying to sell a dream: Charles Kao struggles to convince other engineers that fiber-optic communications will work.
11.    Breakthrough: The clearest glass in the world: Three Corning scientists make the first low-loss optical fibers, using Corning's strengths in processing fused silica.
12.    Recipes for grains of salt: The semiconductor laser: Development of semiconductor lasers that met practical requirements of operating continuously at room temperature, a race in which a Russian group barely beat out Bell Labs (but was not recognized for its triumph).
13.    A demonstration for the Queen: Fiber developers conduct a series of successful demonstrations that show fiber-optic communications is practical. In the process, they obsolete the technology that engineers had expected would be the next generation of high-capacity communication systems, the millimeter waveguide.
14.    Three generations in five years: The fast-paced development of three successive generations of fiber-optic systems, each one more capable than the last, culminating with a shift to single-mode transmission at a new wavelength (1.3 micrometers) that multiplied both transmission speed and distance several times.
15.    Submarine cables: "The ocean floor will be covered with glass": How fiber optics met the most demanding requirements for any communication systems, submarine cables that cross oceans, replacing both submarine coaxial cables and -- for many applications -- communication satellites.
16.    The last mile: an elusive vision: Twenty years of efforts to bring fiber optics to the home, starting with a Japanese system called Hi-OVIS which began operation in 1978. The idea retains its appeal, but has yet to be made practical.
17.    Reflections on the City of Light: Looking back.
18.    Epilogue: the boom, the bubble, and the bust. (Only in paperback or ebook)The development of optical amplifiers and wavelength-division led to a tremendous expansion of fiber-optic bandwidth, creating a boom in capacity which soon became a glut, leading to collapse of the bubble.
Appendix A: Dramatis Personae: Cast of Characters
Appendix B: A fiber-optic chronology